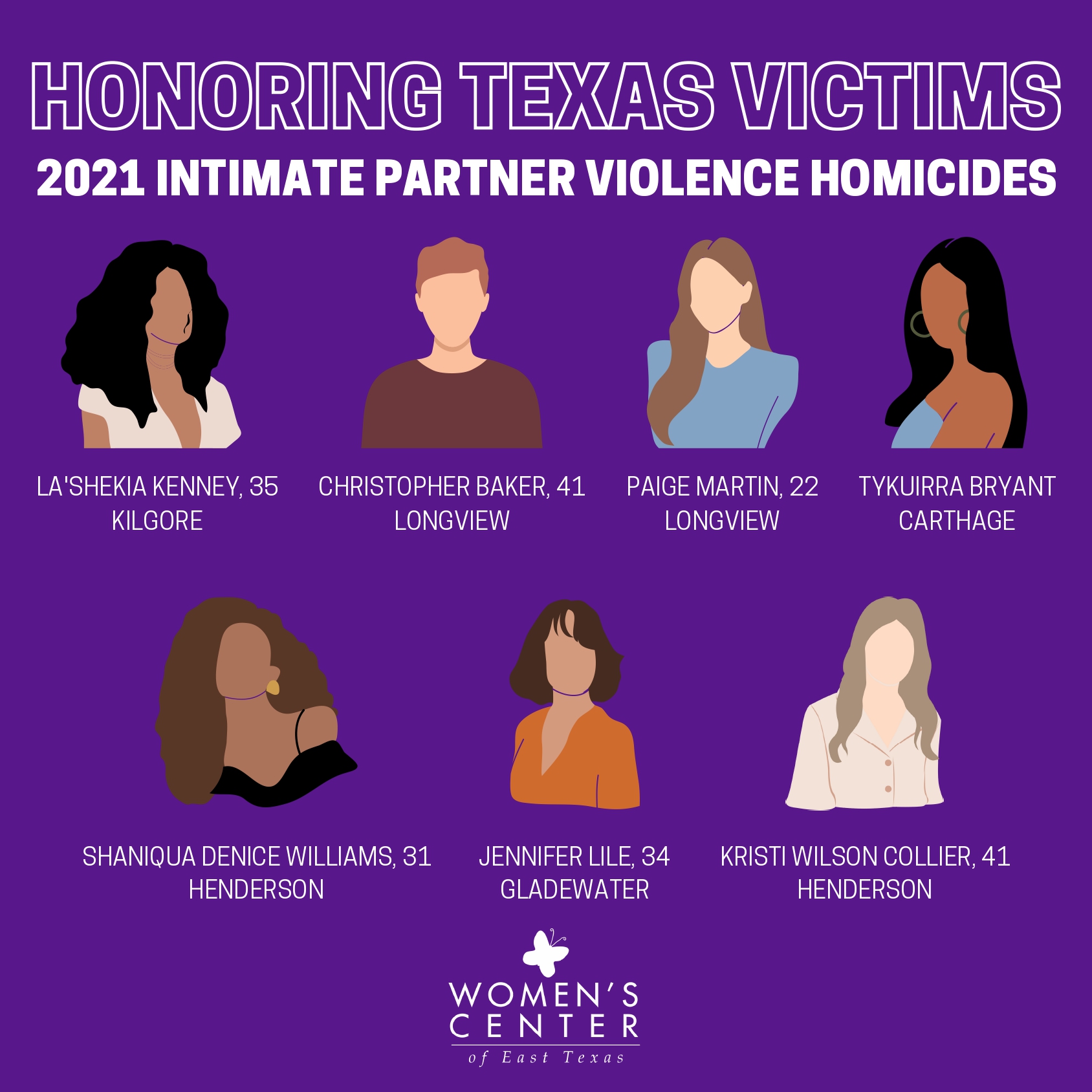 Please join us in remembering the seven lives our service area lost to domestic violence in 2021.

Each of these people were loved and important, and their lives were cut much too short. Our love is sent to their families and friends, and we will continue to focus on ending domestic violence in East Texas.

La’Shekia Kenney died in front of her home when her ex-boyfriend, Kendall Johnson, 33, and his friend, Calvin Anderson, 32, drove to her home and stabbed and killed her. Anderson and Johnson then fled. Johnson had a history of stalking, harassing, and threatening La’Shekia, including showing up at her house and threatening to kill himself if La’Shekia did not get back together with him. Authorities arrested Anderson and Johnson, who have both been indicted for the murder.

Christopher Baker died at the hospital after his girlfriend, Jeanne-Marie Minter, 36, shot him in their home. Authorities arrested and charged Minter with murder. Christopher is survived by his two sons.

Paige Martin died in her home when her ex-boyfriend, Dontrey Walker, 24, strangled and killed her. Walker poured bleach over Paige. Walker then fled to Huntsville, where he engaged in a standoff with local police. Authorities arrested Walker, who later pleaded guilty to murder and was sentenced to 60 years in prison. Paige is survived by her young daughter.

TyKuirra Bryant died in a vehicle outside her home when her boyfriend, Leonard Maxwell Jr., 25, shot and killed her. Maxwell then shot and killed himself. A friend heard the gunshots, located them inside the car, and contacted authorities.

Kristi Collier died at her home after her boyfriend, Coy Jones, 39, shot and killed her. Jones then fled. Police were called to the home for a welfare check and discovered Kristi’s body. Jones admitted to two family members that he shot and killed Kristi. Jones has a history of violence and was out on bond for aggravated assault with a deadly weapon with an unnamed victim. Authorities arrested and charged Jones with murder.

Shaniqua Williams died in her home after her boyfriend, Jarvis Craig Simon, 53, stabbed and killed her. Simon had a history of violence against Shaniqua. A week prior to the homicide, Simon tried to run over Shaniqua with a car. He had an active warrant for his arrest. Simon was jailed for failure to re-register as a sex offender and bonded out the same day. Five days later, he killed Shaniqua and confessed to law enforcement. Shaniqua is survived by her three sons.

Jennifer Lile died in her home when her husband, Mark Lile, 37, shot and killed her. Lile shot and injured himself. Law enforcement were responding to a separate complaint when they heard gunshots coming from the Lile home. Law enforcement entered the home and found Jennifer deceased. Authorities charged Lile with murder, and at the time of publication, he was not medically competent to stand trial.