Is your relationship based on Power and Control?

Dating abuse is an attempt by abusive partners to gain or maintain power and control, and it comes in many forms. Abuse usually isn’t isolated — it forms a pattern of behaviors that collectively make the victim question their own self-worth and become further entrenched in the abusive relationship. The Power and Control Wheel developed by the Domestic Abuse Intervention Project offers a useful tool to understand the dynamics of dating abuse.

Think of the wheel as a diagram of tactics that an abusive partner uses to keep their victims in a relationship.

The inside of the wheel is made up of subtle, continual behaviors over time, while the outer ring represents physical and sexual violence.

Abusive actions like those depicted in the outer ring often reinforce the regular use of other, more subtle methods found in the inner ring.

Note: the Power and Control Wheel assumes she/her pronouns for the victim and he/him pronouns for the perpetrator, but the abusive behavior that it details can happen to people of any gender or sexuality. 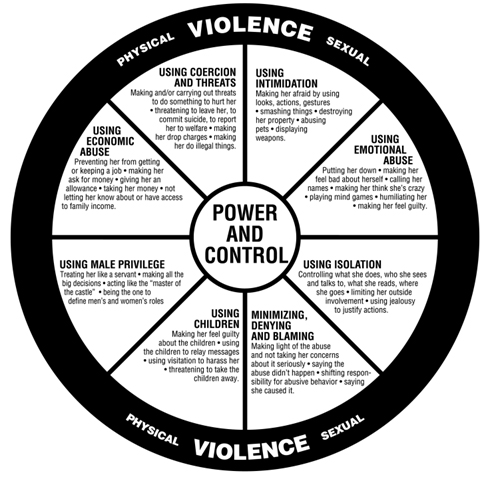 Or is your relationship based on Equality?